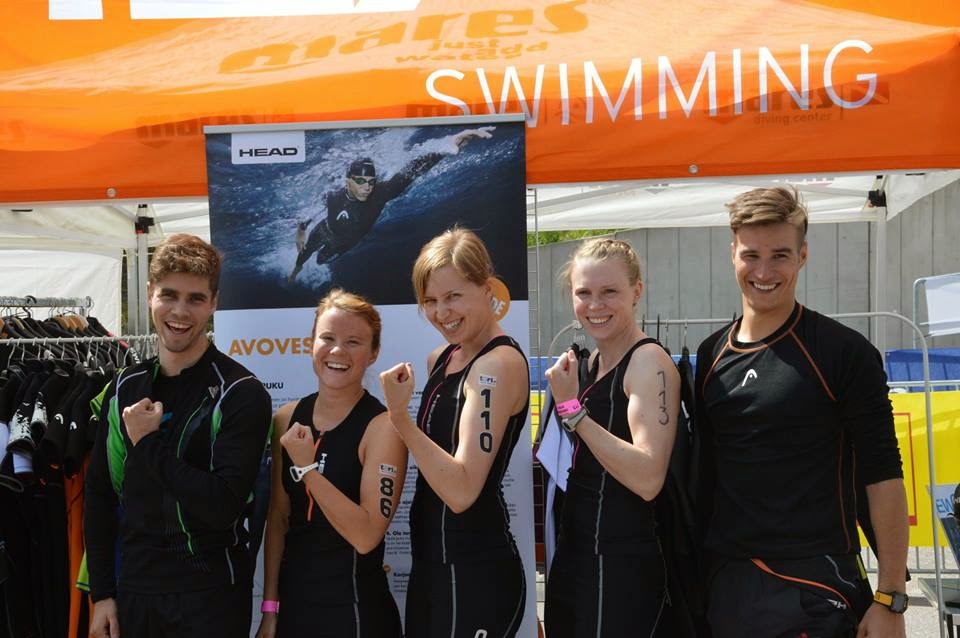 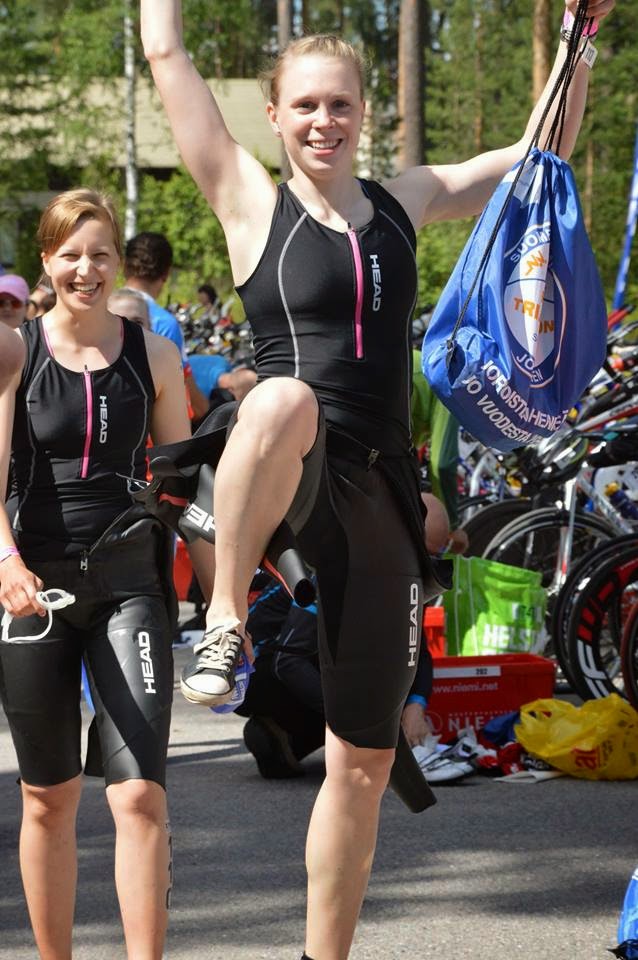 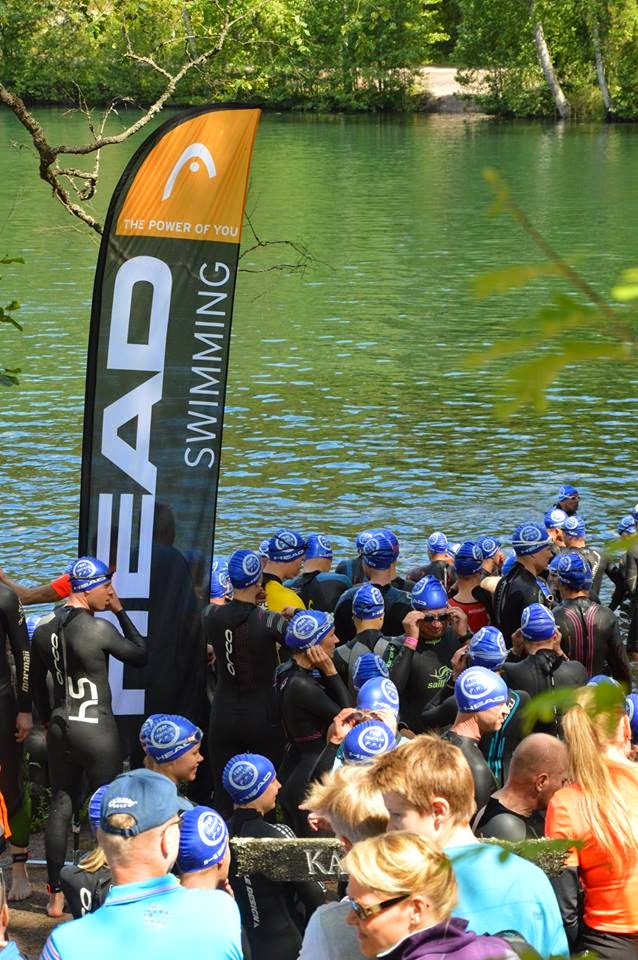 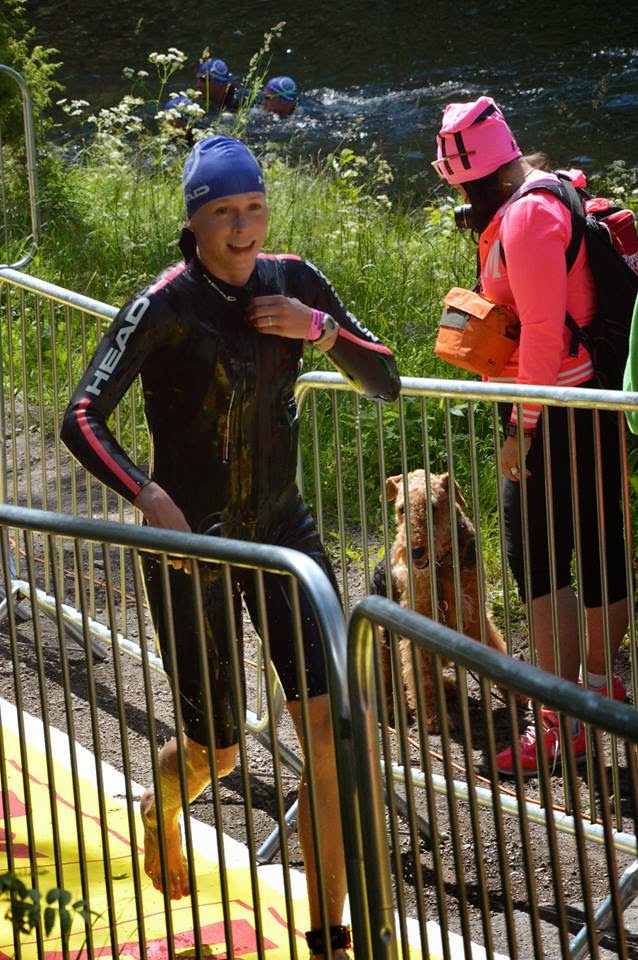 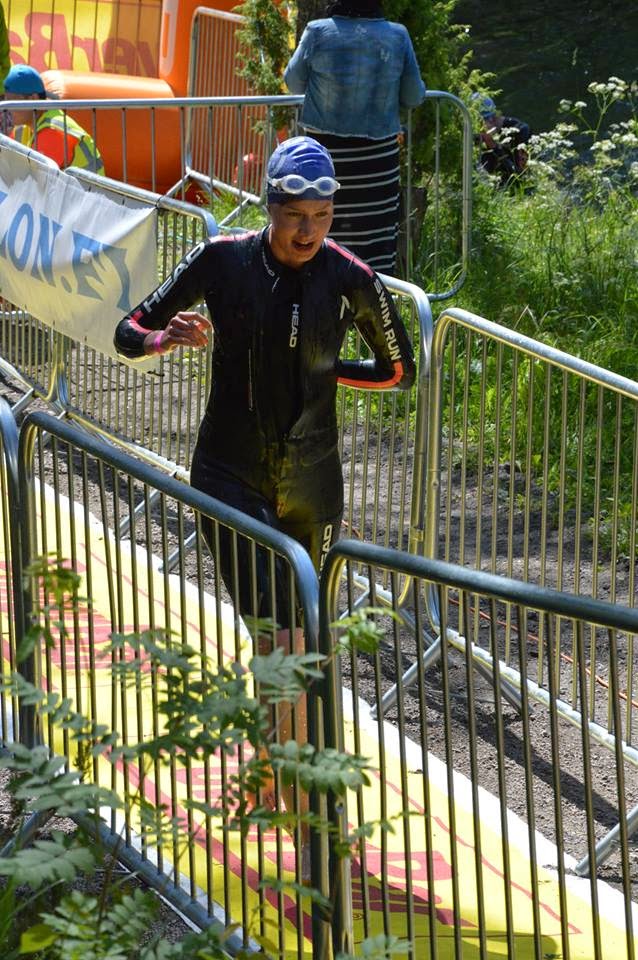 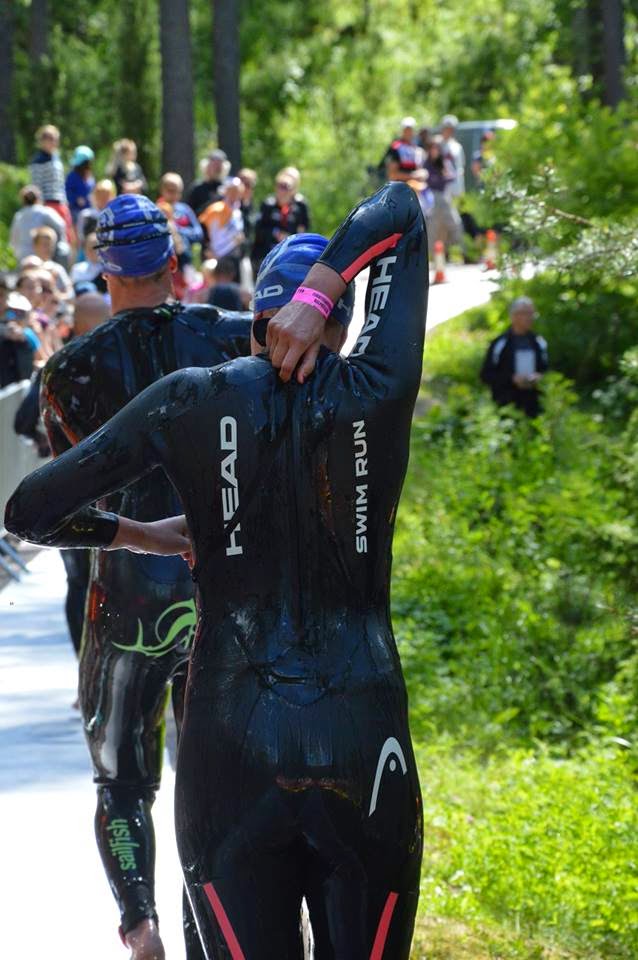 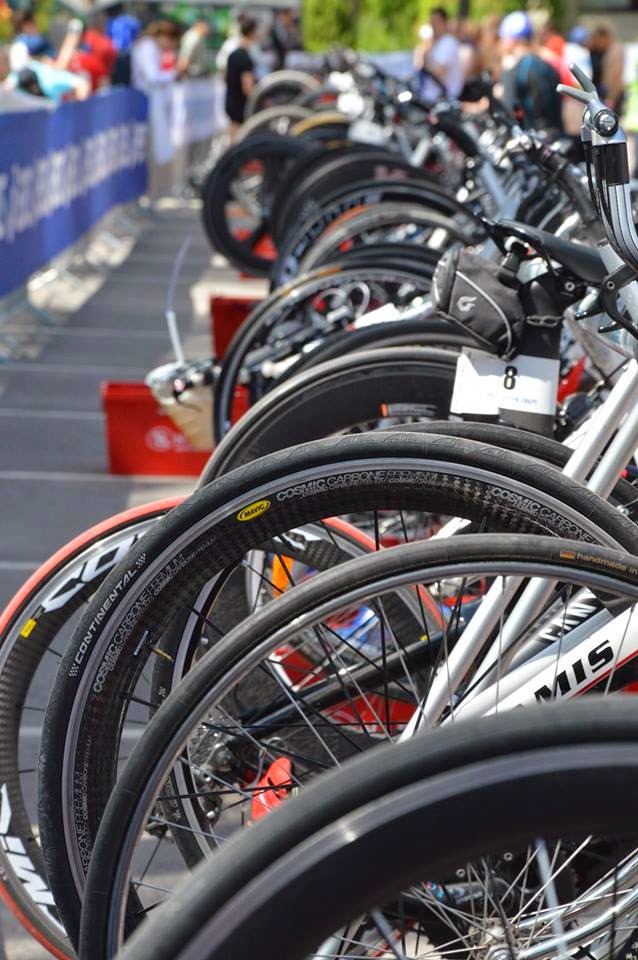 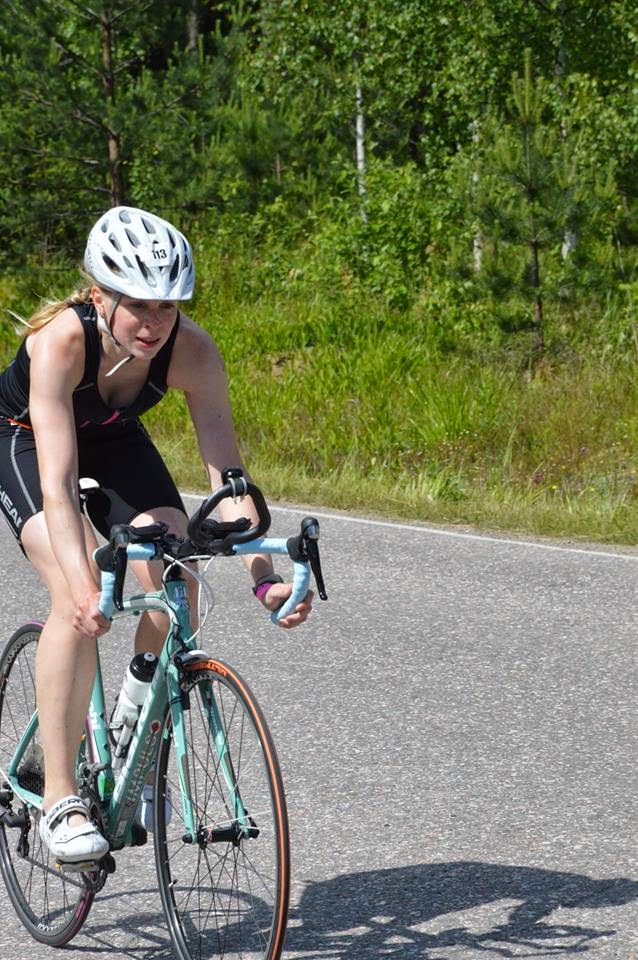 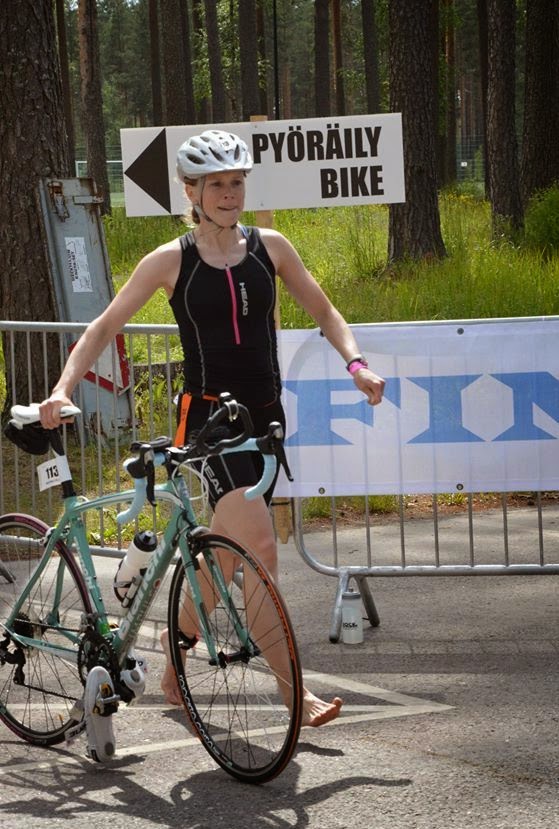 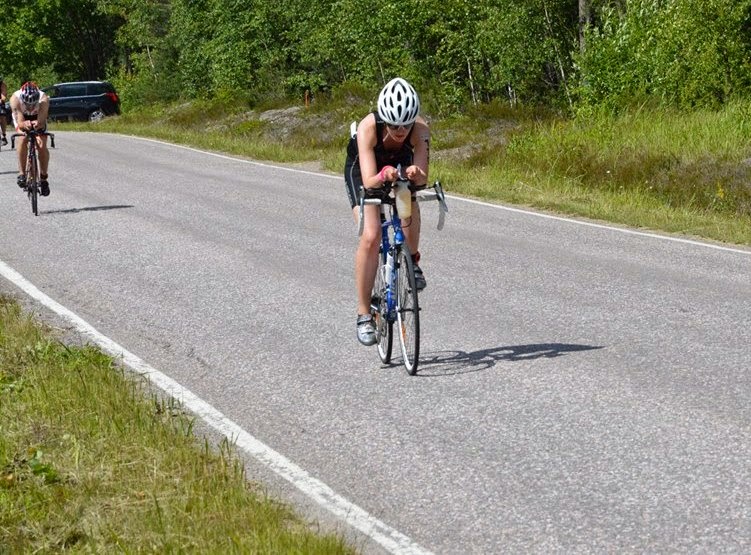 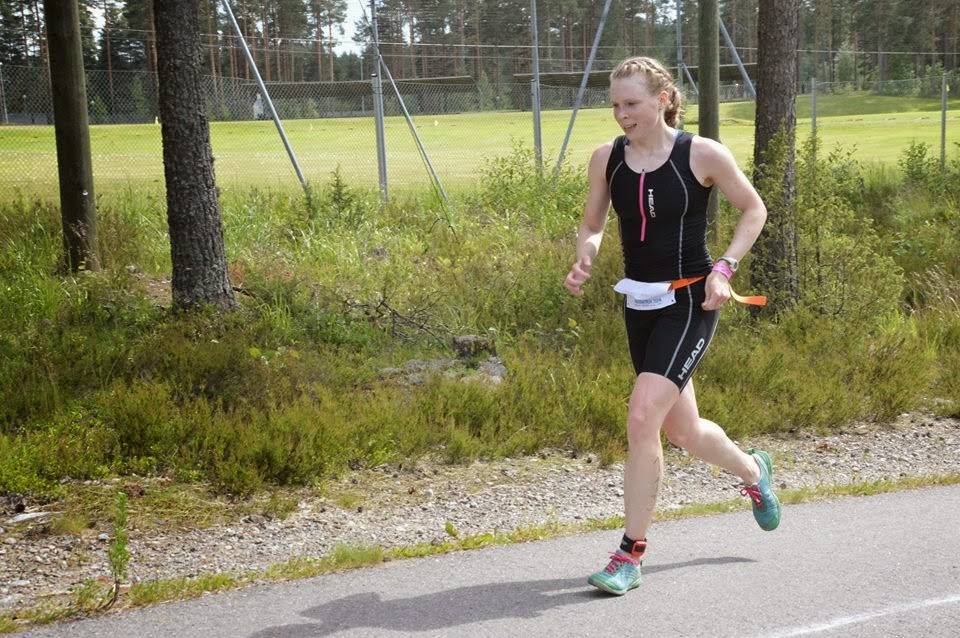 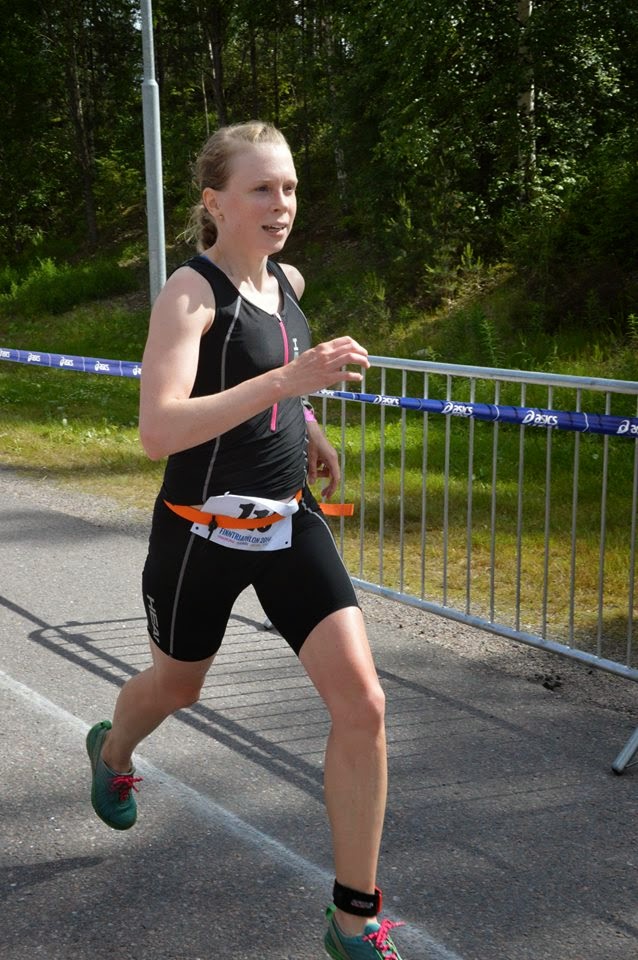 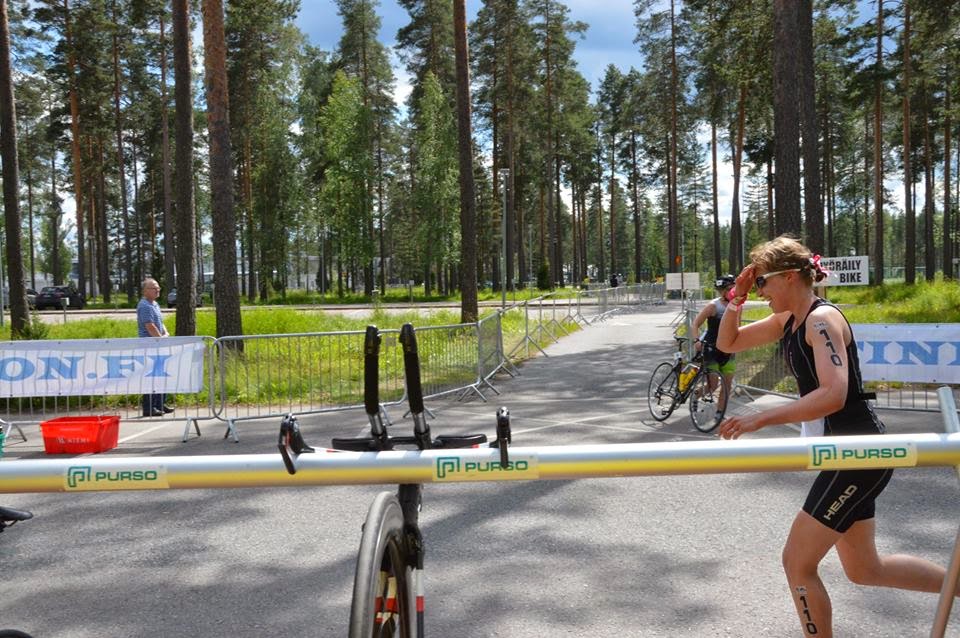 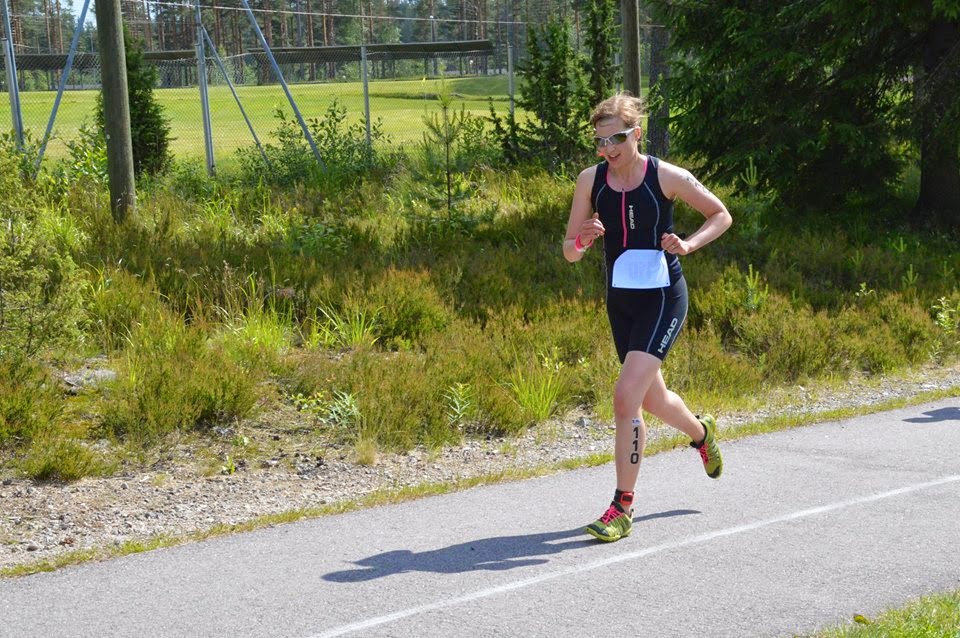 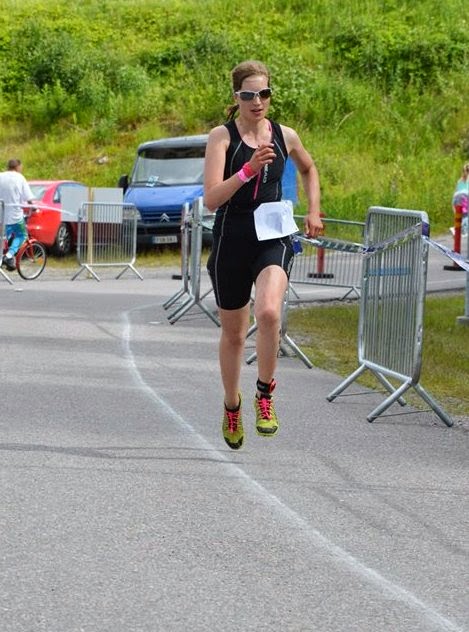 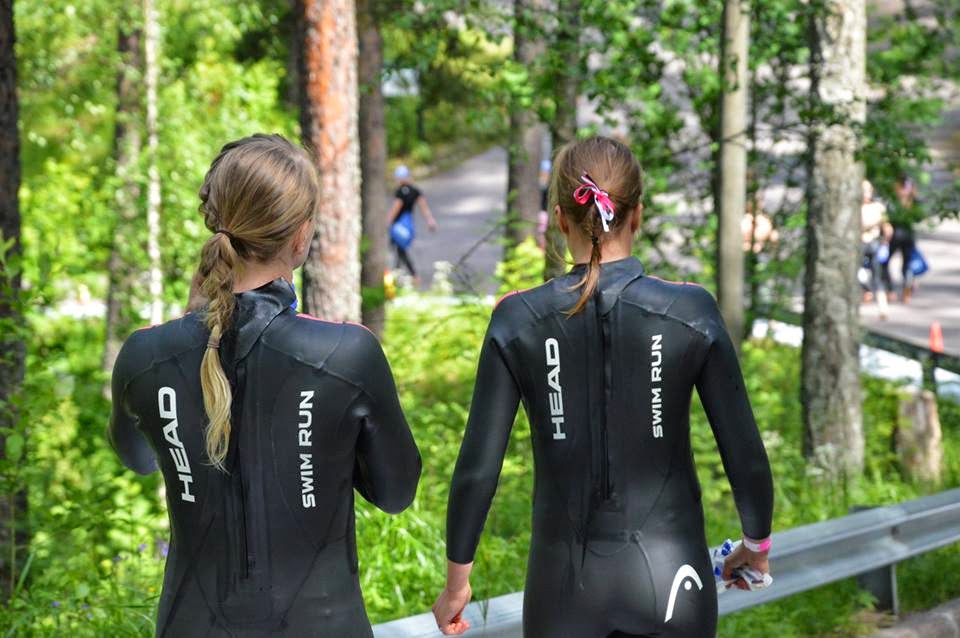 "Pink Seals? More like killer whales…”, said a man on a ferry back to mainland.

On Friday 30th of May at 19.50 we were sitting in a plane flying from Helsinki to Stockholm, both exited and slightly nervous about the upcoming race. Neither of us had a clue that something very important had just been left behind.

You might know the unpleasant feeling when you are waiting for your luggage to show up on the conveyor belt and time after time other passengers receive their bags but yours just doesn’t show up. Usually your bag then comes with the last ones, but sometimes it actually happens that it doesn’t show up at all. The conveyor belt stops, all other passengers leave and you are standing there alone in disbelief.
Just before we left to the airport we had been joking about how we should have packed all our race gear to hand luggage just in case. Neither of us truly believed though that one of us would actually lose her luggage on a flight to Stockholm.

The feeling after the conveyor belt stopped was absolute disbelief – this can’t happen to us now!

We didn’t have time to be shocked. Immediately we contacted the airport staff and told them what had happened. They told that the next flight from Helsinki to Stockholm Bromma would come on Sunday morning and that we would get missing luggage then. We did our best trying to stay calm when we explained them that we have an important race next morning and that our mandatory race equipment is in that missing bag! The answer was that they could do nothing.

After this we really felt desperate, but fortunately our wonderful supporters and friends by HEAD swimming were able to help us. They actually promised to arrange all missing gear (including a wetsuit) for us to Utö next morning.

What an amazing act of kindness! Thank you so much Chris, Linus and HEAD swimming! Without your help we would have totally crashed and probably wouldn’t have been able to start at all.

Right before we were leaving the airport we received a call from Finnair that the missing luggage had been found in Helsinki and that they would deliver it to Stockholm Arlanda nex morning 8 o’clock. The fact was that our ferry to Utö would leave already at 7.30 but we wished that it would be possible to deliver the luggage with the next ferry at 9.30. To make it there the taxi would have to leave from Arlanda at latest 8.30. They actually promised to give it a try.

This wasn’t really the best situation at the night before the race. We made a decision to stay positive and try sleep as well as possible. It was already 24.00 when we finally were at our hostel and going to bed. Five hours of sleep would have to be enough.

In the morning it actually hit us. We don’t have our gear. 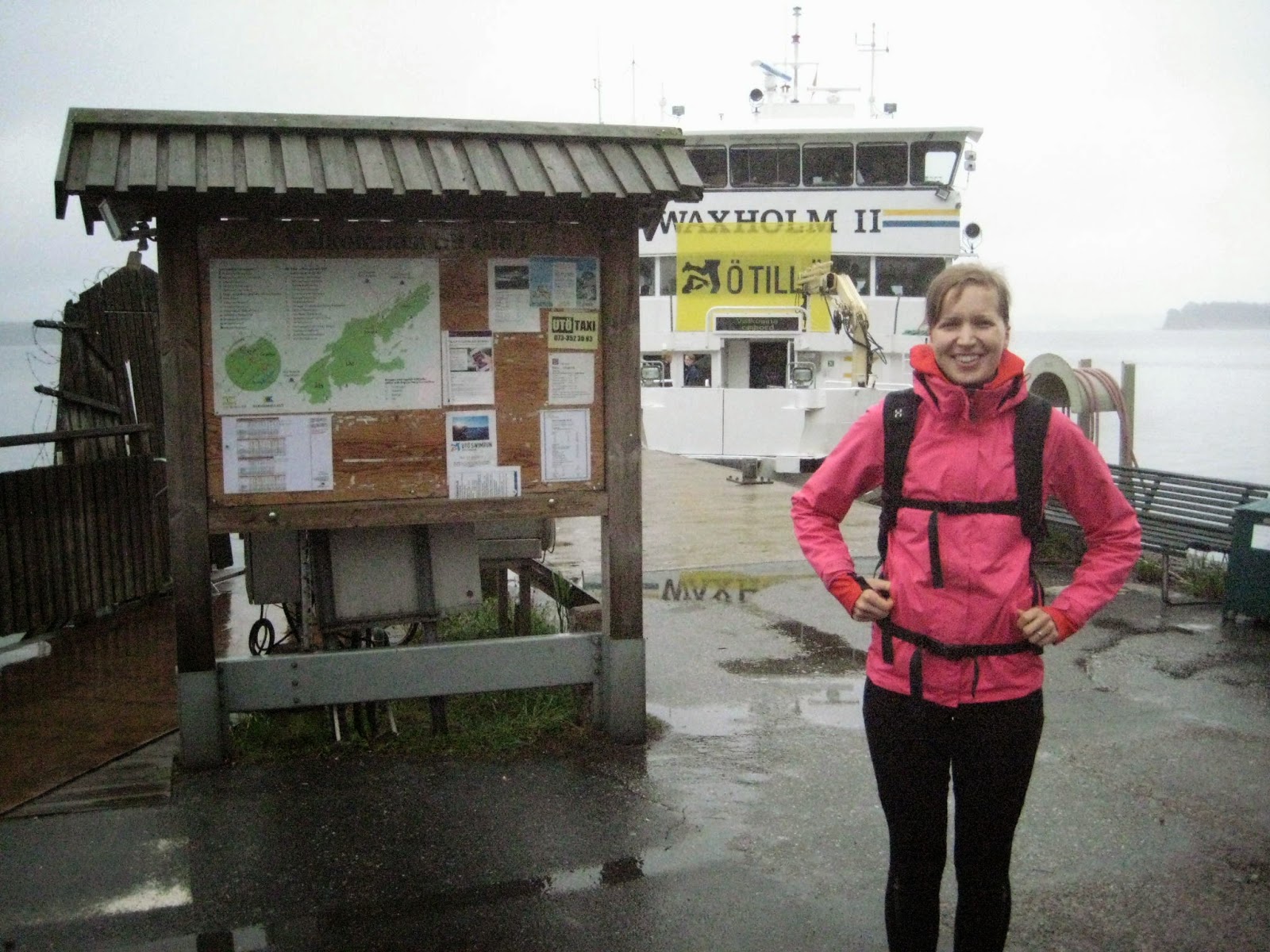 Fortunately Linus from HEAD swimming did as he had promised and delivered a wetsuit, water bladders, whistle and pressure bandage to the ferry. We really can’t express by words all the gratitude we feel towards this guy – what an amazing person!

Now we were actually sure that we would be able to start. It would mean though that JJ (Jenni-Julia) would have to run with her sneakers, that aren’t really be suitable for swimrun at all and swim in a wetsuit that she had never used before. We made a decision that we would ask a permission to start later, after the official start, in order that our own gear would have time to arrive.

On the island we started to look for a person to talk to. Some staff walked by and they all looked busy.

At the entrance of the race center tent, there stood a tall smiling man, who seemed to know every race participant personally. He welcomed everyone so warmly, some people he hugged. He looked like a person, who would understand our anxiety. This person was the race director Michael Lemmel.

We explained our extraordinary problem to Michael, who seemed to feel really sorry for our bad luck. He promised us that we could start later if we wanted but he also assured that he would be able to arrange the missing size 41 trail running shoes for us so that we could start on time. We were amazed. We couldn’t believe that someone was being so helpful towards us, again.

After race briefing Michael told our story to the whole group of almost 300 racers. The answer was an immediate empathic “oh no” from the whole crowd. Straight away one racer raised his hand to tell that he had the shoes we needed. It didn’t take long though before another determined looking woman came and threw us a bag. “Don’t you beat us now”, she said. The bag included both a wetsuit and shoes, that both fit JJ like a glove!

The woman was Helena Lindahl from the Team Lisa's Café, that won Utö swimrun last year – another amazingly friendly person! Or how often have you seen someone helping a competitor in a race??

Thank you Helena, and Linda also! You totally saved our day and made it possible for us to achieve our goal to qualify for ÖTILLÖ. And sorry for beating you! ;) We can’t wait to meet you again in Engadin and of course finally in ÖTILLÖ.

At this point we felt totally blessed! Nothing could stop us now. One more fantastic surprise was still waiting for us – that was PINK race caps! This would be our day, we were sure of it. 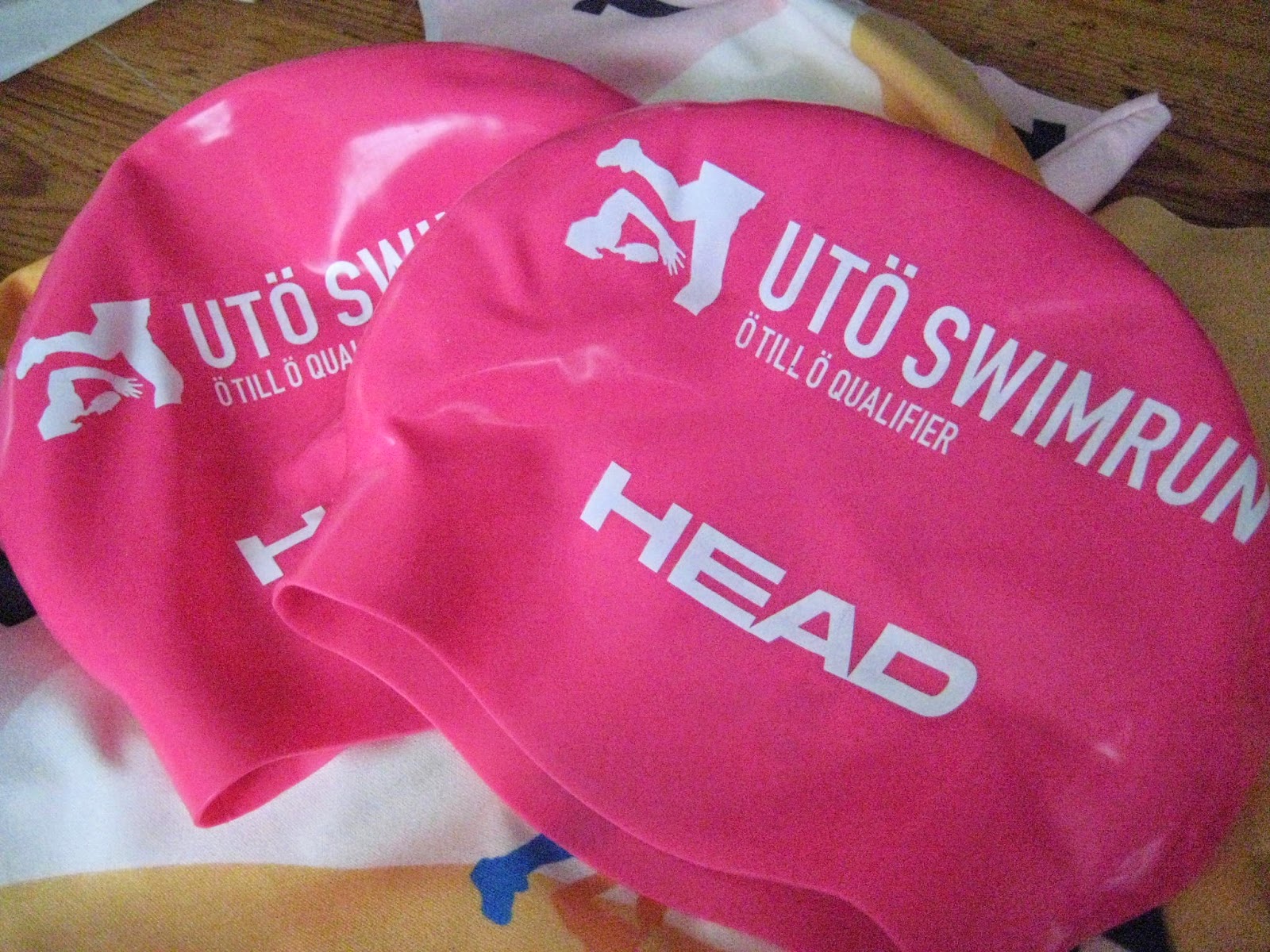 Standing on a start line, we both felt very energetic and ready to rock the course. It somehow hit us that we were finally doing it – starting the race that we had been training for several months. The atmosphere was festive and the weather was perfect - + 15 degrees, slightly cloudy and a little bit rain.
When the start finally happened it was difficult to hold back our eagerness to burst it all out straight away. Fortunately it was pretty crowded in this phase. We were just so happy that we could only swim and run the whole day. We didn’t really think about qualifying or how well we would place in the race. We just wanted to enjoy the experience and take all out of this amazing course.

Swimming was totally amazing. Water was so clear and refreshing between the runs. A few years ago we both would have had probably freaked out because of all the things we were able to see below. But now it was only fascinating. The swims were pretty short from 40 to 480m.

We soon noticed that even if we might lose a bit time to other teams in swimming, our running speed, then again, was a great advantage.  We also decided not to use too much time at the energy stations and thus didn’t really stop at all during the whole race. Our tactic was to keep it simple and fast. We left out all equipment, that we felt wasn’t absolutely necessary and helpful – meaning pull buoys and a rope. Since the weather was quite cool and running legs pretty short, we took off the upper part of the swimrun suit only for the 5,2 km leg in order that we wouldn’t waste time for fighting with our equipments.

Although we didn't spend much time at the energy stations there were pretty good things available for example Gott och Blandat candies.

The terrain was very varied from gravel road to off road. We preferred trails and off road. On the slippery rocks we tried to obey race directors instuctions to run with our heads and not to get injured. No brain, no gain.

Soon we noticed that we were passing by other women's teams. Last year's winners were the first team that we left behind. After that came a second team… third… and fourth. In addition to those four women's teams, we passed by several man and mixed teams. Every team left behind gave us a small boost of extra energy. At the 5,2km run we get a glimpse of a team ahead of us. At that point we had no idea that those two women were holding the 3th spot on a race.

Everything went rather smoothly until JJ’s legs started to stiffen in the last quarter of the course. Our speed seems to have been quite good anyway.

After the second last swimming leg, Anu noticed a women's team reaching us. Amazingly this information made JJ run a lot faster. And we left that team far behind during the 1 km run before the last swim leg.

The last swim was the toughest. Hands and shoulders started to ache but it paid off to speed up. We managed to keep a gap between us and that team behind us.

Now it was only the last 1 km run leg between us and the finishing line. Soon we could already see it, but there was a leg killing uphill before it.

Last meters up hill and then we were done!

Everyone was saying how well we did, including Michael, who came to congratulate us right after finish. He told that we probably qualified, but we really couldn’t believe it before the qualifiers were officially announced.

WTF?? WE?? The first timers, who didn’t even have they own gear?

We haven’t perhaps totally realized it yet, but the truth is that this team is actually HEADing for the Swimrun World Championship ÖTILLÖ 2014.

There are literally no words to express our gratefulness towards every single one of you who has been making this day happen. Everyone in race organization, all volunteers, all the happy faces cheering by the course, our fellow teams in Utö Swimrun 2014, our supporters HEAD swimming, Urheiluhallit and Melina Charlotte Productions, and of course you guys back home following our journey, you all deserve a big hand!

We think it's fair enough to assume that this is just the beginning. 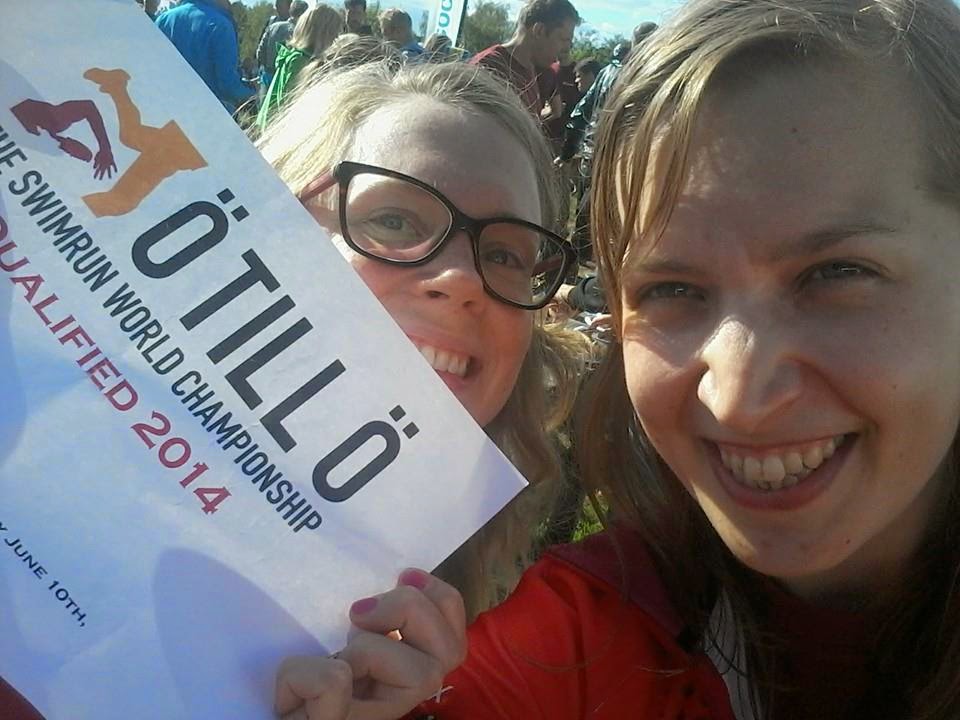 You'll find more photos about the race here. And from finish line here. 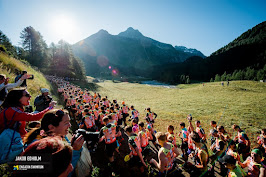